Castles and Calendars: Where we've been!

We are in Bucharest, Romania, today. We saw two castles while we were here: Peles Castle and also Bran Castle, also known as "Dracula's Castle" (though I think more than one has this claim).

Tonight we will flying to Athens, Greece.

Khevron has updated the map and calendar of our travels.
Here they are: 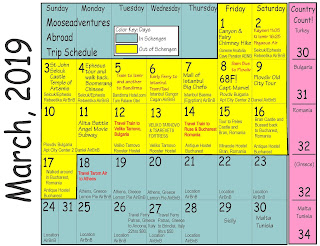 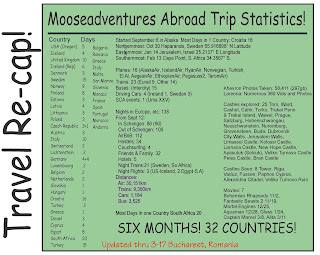 CASTLES AND BUCHAREST:
We stayed in a hostel in Bucharest, the Antique Hostel, and they sponsored a new tour that went to Peles and also Bran Castle that was 20 Euros cheaper than the standard tour (but had only been going a week). We took it but the guide was new and we took too much time and partly, this was our fault, eating lunch too long. But he said, take your time. So, we arrived at Bran Castle at 5:00 PM and it had closed at 4:00 PM.

Our complaints about the tour fell on unsympathetic ears and we were never sure if the owner of the hostel had organized this tour or not (because he sometimes acted as if he had and other times denied that this was his tour). And at one point, he demanded to know how I had gotten his phone number to text him. I told him I'd found it on the website. Anyway, he alternately apologized and also blamed us for getting to Bran late. And then tried to guilt us into being the reason for the guide to get in trouble and maybe lose his job.

Overall, the entire debacle has left a very bad taste in our mouths. And I, for one, will be glad to fly to Athens!

BRAN CASTLE
is a national monument and landmark in Romania. It is called "Dracula's Castle" but the connection is pretty thin, as I understand. It does have a connection to Vlad the Impaler, on whom Dracula was said to be based. But the castle is not in the spot described by Bram Stoker, and also isn't crumbling. Still, it's an amazing castle.


PELES CASTLE:
Peleș Castle is a Neo-Renaissance castle in the Carpathian Mountains, near Sinaia, in Prahova County, Romania, on an existing medieval route linking Transylvania and Wallachia, built between 1873 and 1914. Its inauguration was held in 1883. It was constructed for King Carol I.


KHEVRON'S MOOSEADVENTURES PAGE:
Here he puts up the maps and calendars of where we've been.
http://khevron.tripod.com/khevron/abroad/