Greece and the Greek Gods

WE LEARN ABOUT GREEK MYTHS
Before heading to Greece, we read the Stephen Fry's delightful book all about Greek myths, called "Mythos".  Definitely worth a read.

Here are some of my favorite Greek gods:
Athena, She burst forth from the head of Zeus, fully formed and ready for war.


Aretemis; Also the daughter of Zeus. She was the Goddess of the hunt, and wild animals. Also an avowed virgin and the protector of young children.

My least favorite:
Hera & Zeus. Basically Zeus spent a lot of his time chasing other women and Hera was very jealous. And not very forgiving.

I wondered what happened to the religion based on the Greek mythology, since no one seems to believe it today. And maybe even back then, maybe they knew a lot of it was fictional. Hard to tell. I read an article that said that the belief in Greek myth faded away and was replaced by Christianity. He said that all of the vices of the ancient gods made them hard to believe. Also he said that the Greek mythology was banned and people who believed it were hunted down. So, another good motivation.
https://www.youtube.com/watch?v=Rd-wZOZyTrs

The Greek myths started during the Bronze age, but in the 18th century it became part of the oral tradition of Homer's epic poems, the Iliad and the Odyssey.
https://en.wikipedia.org/wiki/Greek_mythology 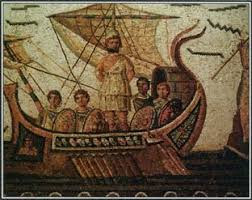 "Around 700 BC, the poet Hesiod’s Theogony offered the first written cosmogony, or origin story, of Greek mythology."
https://www.history.com/topics/ancient-history/greek-mythology


FUNNY GREEK GODS
by SNL
Check this out! Hilarious!
This skit will make you laugh as the Greek Gods attempt to come to the aid of Greece during their financial crisis. "We do have a god in charge of finance, right?" asks Zeus.
https://www.youtube.com/watch?v=IcaHutZQiIA 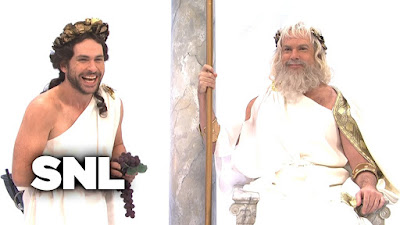